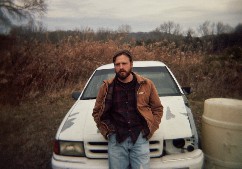 Frank Bill is the voice for the white trash population of the American Midwest. His books, which were written between shifts at the paint factory where he still works, have attracted international attention due to their sincere voice and hard core descriptions of life in the American heartland. He has been compared to Cormac McCarthy and is said to have moved the Southern States’ Gothic style across the Mason Dixie line and into Yankee territory. His short story collection Crimes in Southern Indiana and novel Donnybrook have been translated and published in Norwegian.