Invitation to Public Meeting on Freedom of Expression 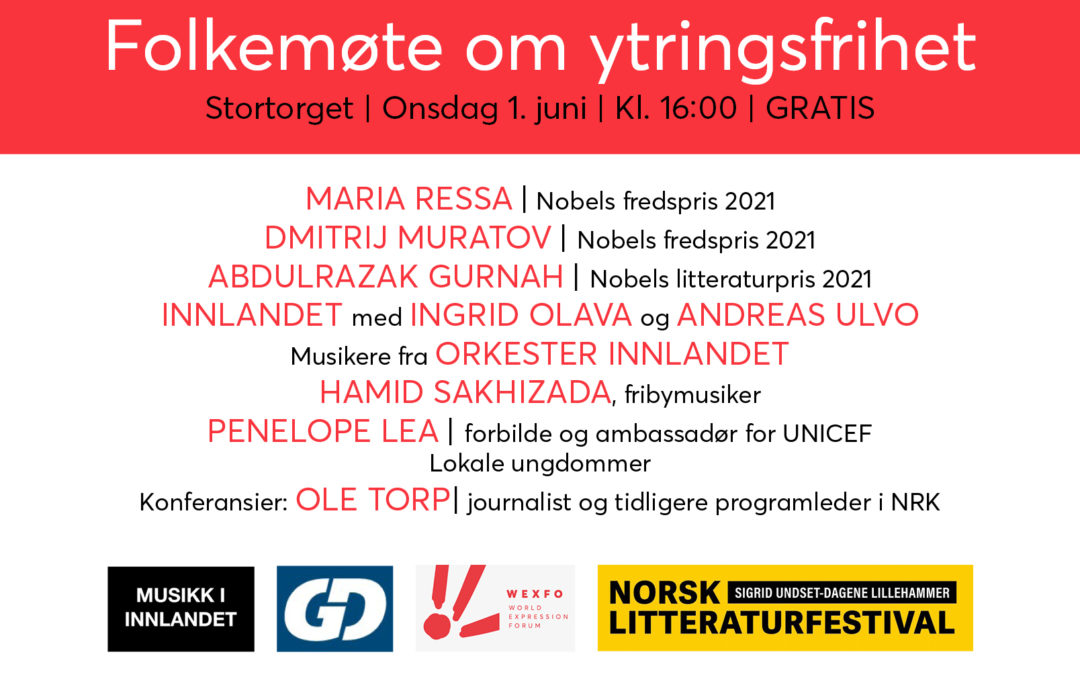 Three Nobel Laureates, local youth and musicians of international class are on stage when newcomers World Expression Forum and Music in Innlandet, in collaboration with the Norwegian Literature Festival and GD, invite to a public meeting on freedom of expression in Lillehammer.

Freedom of speech has long been under pressure. War in Europe is threatening it in a new and acute way. At the end of May, the very first edition of the free speech congress World Expression Forum will be held at the same time as the Norwegian Festival of Literature. Freedom of expression will be used, discussed and problematised and issues that engage both the young and the elderly, locally and internationally, will be put on the agenda.

What happens in Lillehammer this spring, which is marked with a large public meeting at Stortorget on 1 June, is unique. The winner of the Nobel Literature Prize, Abdulrazak Gurnah, from Tanzania, and the winners of the Nobel Peace Prize, Maria Ressa, from the Philippines, and Dmitry Muratov, from Russia, are on stage. Gurnah was awarded the Nobel Prize in Literature for “uncompromising and with great compassion to have permeated the effects of colonialism and the fate of refugees in the chasm between cultures and continents.” Ressa and Muratov received the Peace Prize for their “efforts for freedom of expression, which is a prerequisite for democracy and lasting peace.” They have both experienced how dangerous it is to be uncompromising on behalf of freedom of expression.

Muratov is the long-time head of the Russian newspaper Novaya Gazeta. He has criticized Russian authorities for corruption, electoral fraud, and human rights violations. Six of the newspaper’s journalists have been murdered because they wrote critical articles about Russia’s military operations in Chechnya and the Caucasus.

– This event is important. We are pleased to be able to invite you to a large free event with both the World Expression Forum and the most important guests of the Norwegian Festival of Literature, says Festival Director Marit Borkenhagen. – The fact that we are bringing three Nobel Laureates to the same stage is unique. It could not have happened without us uniting forces, she continues. – When Music in Innlandet and GD join the collaboration, the result will be a powerful celebration of the important topic of freedom of expression.

World Expression Forum has aimed to be an international meeting place for freedom of expression. It also aims to ensure that Lillehammer becomes as essential for the celebration and discussion of freedom of expression as Davos is for economics.  School students must be involved, locally and nationally.  Key representatives from the media industry, artist organisations, human rights organisations and the education sector are enrolled. The ambition is that the engagement should reach out wide. The organisers set the bar high when they invite people to the public meeting.

“This is a great opportunity for the World Expression Forum to share with many, one of the most important things that happen at our first conference: Young people participating in our first project on the possibilities of their participation in democracy and the important stories of this year’s Nobel Peace Prize winners,” says Kristenn Einarsson, Director of the World Expression Forum.

Freedom of expression is crucial for journalism. No journalist can practice his profession in a good way without it.  Are we equally aware of how important freedom of expression is and a safe framework for using it in everyday life in the classroom or workplace?  And what is it like to be a writer, filmmaker, or musician when the room is constrained, threats and hate speech spread?

– Music in Innlandet is very pleased to be able to take part in the cooperation on this significant event, says leader Solbjørg Tveten. – In a world where artists experience threats and censorship precisely for their music, it is increasingly relevant to emphasise the role of music as a bearer of meaning and a form of expression, she continues, elaborating; – The duo “Innlandet”, with Ingrid Olava and Andreas Ulvo, in collaboration with musicians from Orkester Innlandet and ICORN Free City musician Hamid Sakhizada, will take us into their musical universe.

The public meeting is free of charge and will be held outdoors at Stortorget with NRK’s former foreign correspondent and presenter, Ole Torp, as conferencier.

Be there, support freedom of speech, and experience role models who aren’t afraid to raise their voices to express what they’re passionate about.